Corealis store was designed as the model (concept) store for a new brand in the seafood market in Greece. Its architectural design mainly emphasizes in the clear modern shapes and the material’s textures. The combination of the multiple layers of the façade reveals the concept of the brand: the fisherman, the texture of the pierced, like a net, metal sheet, the 3-dimensional construction of the brand’s logo, which forms the entrance of the store.

In the interior, the basic concept aims the creation of a modern and functional space characterized by simplicity disregarding the so far known models for this kind of enterprises.

The walls are covered with emerald colored tills, whereas red, the secondary color of the brand’s identity palette, is used to mark the “hot corner” of the store. (Brand development by : Sonar Marketing Consultants www.sonar.gr – Contractor : KDI CONTRACT www.kdi.gr) 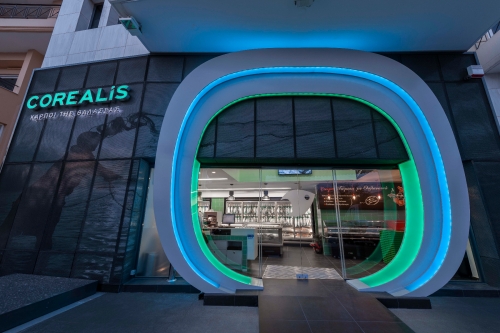